I weighed Andrew tonight and that’s what it said! He had his diaper and onesie on so it may be a few oz less but still what a big boy! Today (Sunday) was a great day. He was so happy – just eating and sleeping. Monday and Saturday were a total different story. But two out of seven isn’t bad. We just need to be prepared to expect one mood or the other I guess.

We had a pretty unexciting weekend which was nice-I managed to fold and put away a mountain of laundry that has been growing for over a week. We had dinner at my parents Friday and Sunday. It’s so nice not to cook! I am loving eating outside while we can. Here is a picture of last weekend. 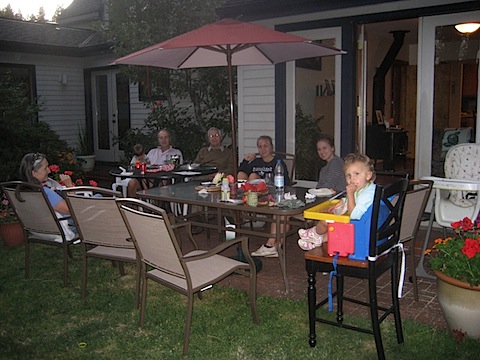 Abigail loves having her Pa in town. She goes and picks plums with him in the backyard and then goes to play in the club house. She loves her new table and deck! 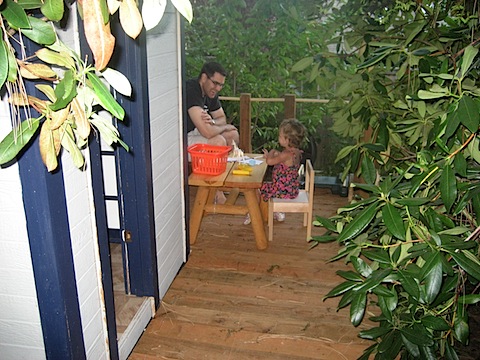 One of my favorite things is the backyard- 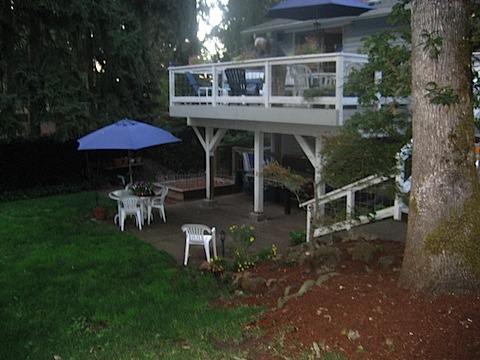 This is what you see when you step out on patio-

We are so excited to move in. We are thinking we’ll move in mid-October. 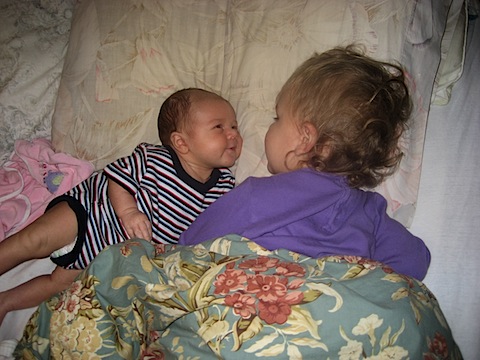 RT @thejoelstein: Before I had a baby, I never called anyone buddy. Now I’m Pauly Shore. (web) (30min ago)

by The Oregonian editorial board

The East Coast conglomerate that now owns Tektronix doesn’t appear to care much about having smooth relations with the state of Oregon.

Danaher Corp., which bought Tek in 2007, entered negotiations with Gov. Ted Kulongoski’s office in June over the fate of hundreds of jobs, which a company executive said would end up either in Washington County or Everett, Wash. In a bid to keep the jobs in Oregon, the governor’s office offered a substantial package of tax breaks and other incentives worth more than $1 million.

That’s the sort of aggressive leadership Oregon must have if the state has any hope of saving what’s left of its shrinking high-tech sector. Sadly, however, Tek announced out of the blue last week that it will move an unspecified volume of production work out of Oregon — not to Everett or anywhere else on U.S. soil, but to China.

Shanghai, to be precise.

The terse e-mail announcement caught the governor’s office by complete surprise. So much for trying to work with Danaher.

The company is being tight-lipped about how many Oregon jobs it will eliminate. Tek employees told The Oregonian’s Mike Rogoway that more than 400 work in the main manufacturing complex at Tek’s headquarters campus near Beaverton.

The governor’s office was led to believe that about 200 Oregon jobs were at stake when the rival location was Everett, where Tek has a sister company. Company sources told Rogoway that many more jobs than that could be lost in the move to China.

Though the announcement was a rude jolt to state officials who had tried to accommodate the company, it was no huge surprise in the broader arena of Oregon high-tech manufacturing. As Rogoway reported last week, the sector has been buffeted this year by Washington County employers like Intel, RadiSyscq and Integrated Device Technology, all closing facilities or moving jobs to Asia.

Perhaps the biggest nugget of news in Rogoway’s story Thursday was his finding that Oregon’s faltering high-tech sector “employs fewer people today than at any point in the past 13 years.” It’s part of a decade-long national trend in which companies seek cheap overseas labor and close proximity to the high-tech supply chain.

Tek’s abrupt announcement, however, is more than just another disappointment in a long string of them. Tektronix was once a storied company — the pioneering juggernaut that gave birth to several generations of Oregon technology companies and at one time the largest private employer in the state.

So the loss of Tek jobs to China isn’t just an economic setback. It’s a blow to Oregon’s psyche.

Our offer was accepted on the house. Looks like we’ll be moving soon

Well we have had lots of visitors this week. Abigail has loved all the excitement. Sadly I didn’t take pictures with our visitors to post. Yesterday my teacher friends came to visit from Salem. Today a childhood friend came for lunch. She was on her way to California.

We’ve also been busy with visiting Abigail’s aunts and uncles. Here’s a picture of Abigail with Uncle Seb at Amazon Pool where he lifeguards: 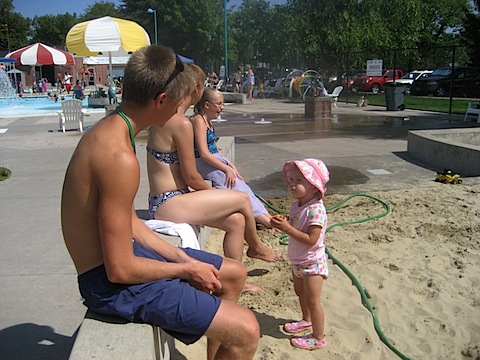 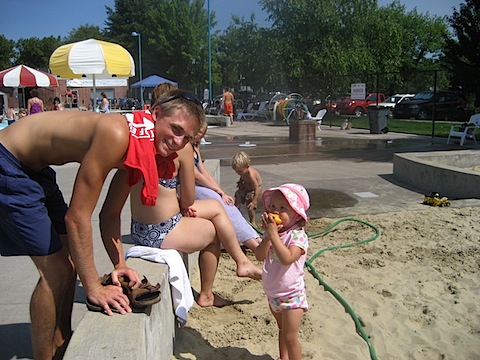 Here’s a picture of visiting Uncle Ben at his work: 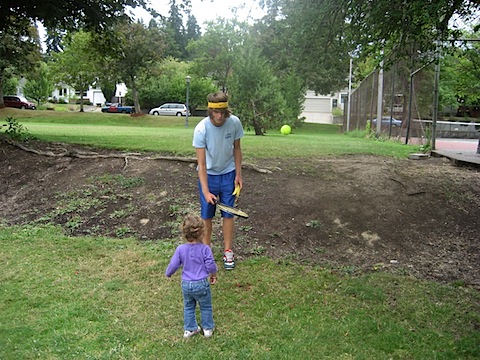 Ben taught her to hit the ball with the racket. 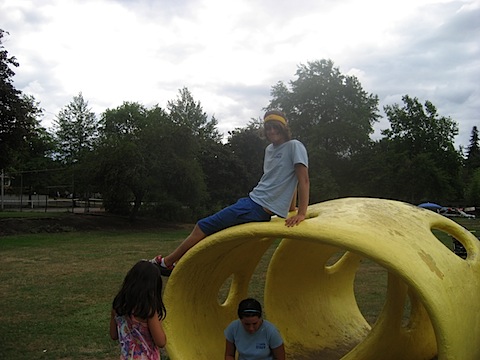 Abby and I heading down to Autzen to watch the Ducks scrimmage.

Here’s a picture of Kyle: 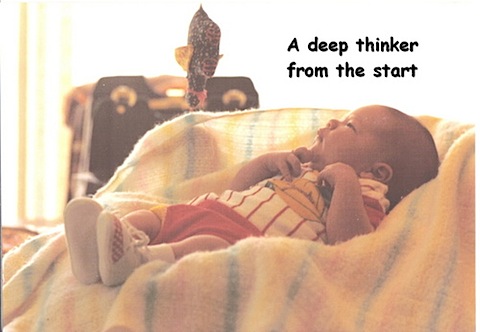 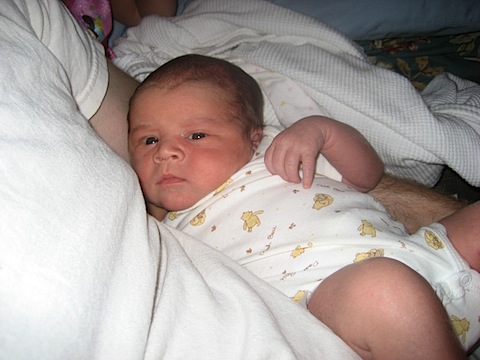 Mommy as a little girl: 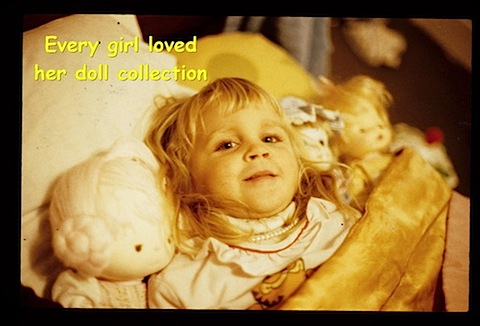 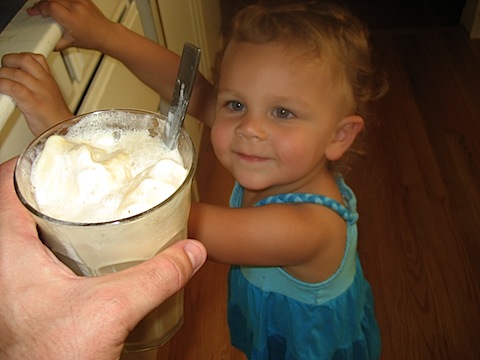 This is the one I’ve been looking for- check out the curls: 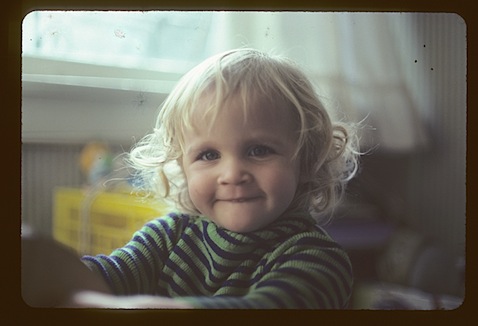 Abigail getting her ice cream float from Daddy: 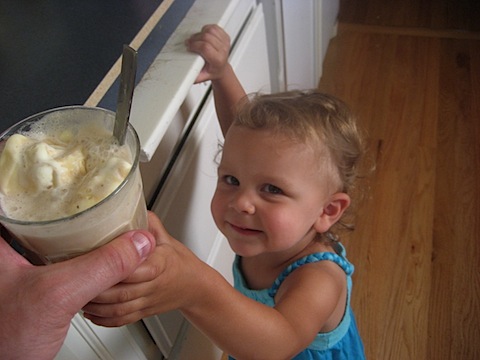 Andrew just heard Riffle do a set at Amazon park. What was that about.