This was one of the highlights of my birthday –

After dinner Abigail wanted to do family meeting. We started with compliments. This was Andrew’s compliment to me:

Andrew to me: ” My compliment is I love you so much and thank you for reading books with me.”

At this I teared up, and I tear up now as I type:) these are the moments that make parenting so special and worth all the night wakings, etc

We are On our way home from a quick trip to Portland. Tuesday I met up with an old friend at the children’s museum. We did the water play, the tree house room , the dig pit and the animal hospital, construction area and the theater. Next time we need to do the art room and the grocery store and the exhibit room. It was so nice seeing my friend Carrie. She was one of my first mom friends in Portland when I lived there. We were pregnant together, raising our babies together. And now our babies are almost 5! I hadn’t seen her since we moved, it was so fun to catch up and see her kids. 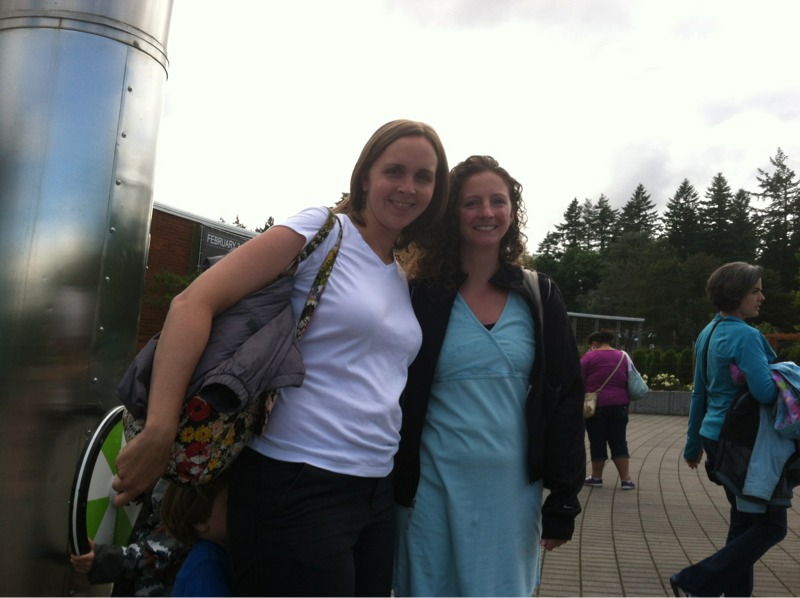 Wednesday I spent the day with my family in Cornelius. The kids had cousin time. We had a fun trip to the library to see the yoyo university. We had a nice BBQ last night. 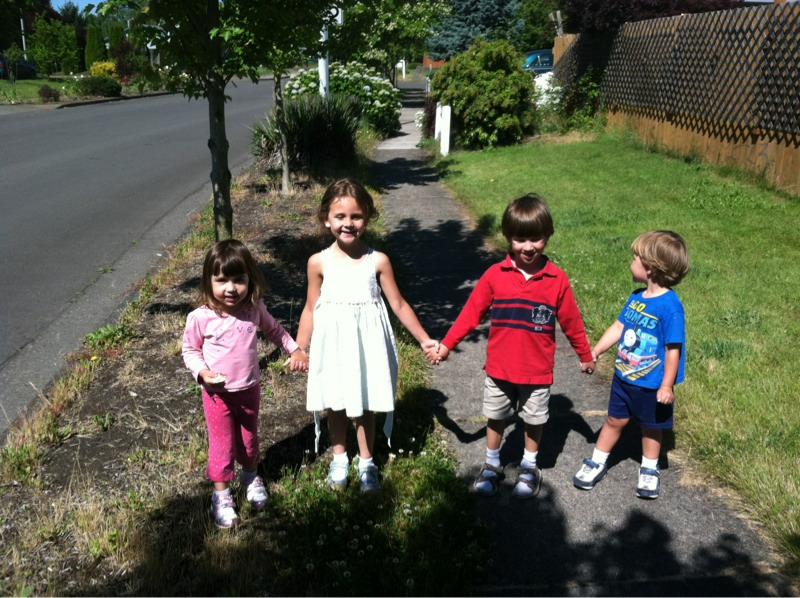 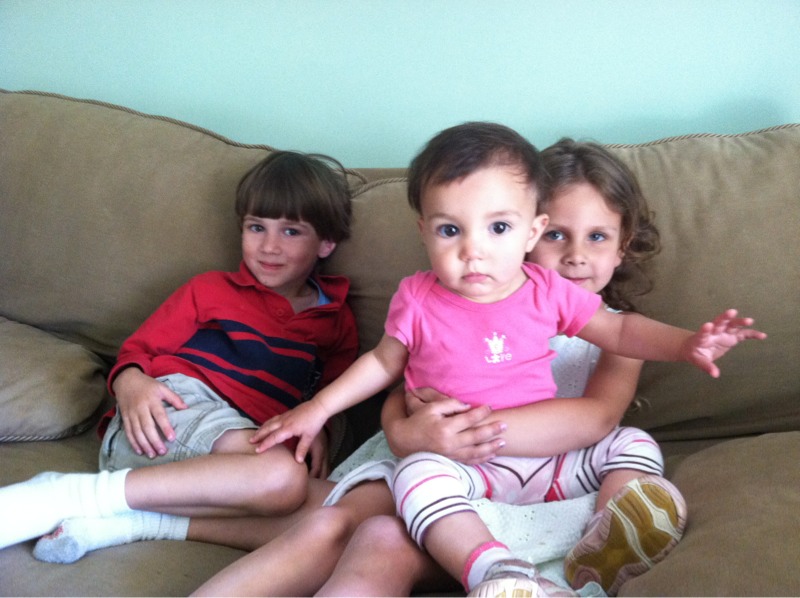 Today we are having beautiful weather so we headed to the zoo. I think we saw it all- we were there 5 hours! We did the train for the first time, they loved that! During the ride Abby whispered “I love you” in my ear. She really like the bird show and the penguins. 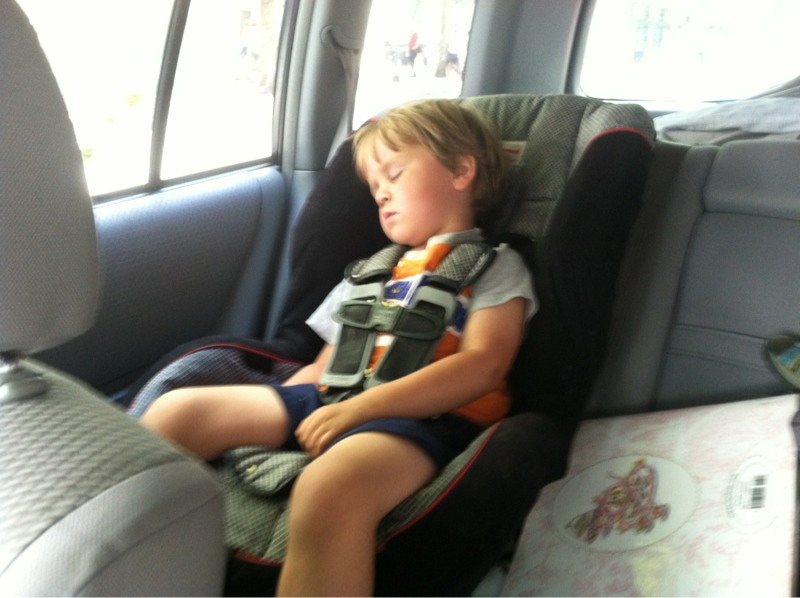 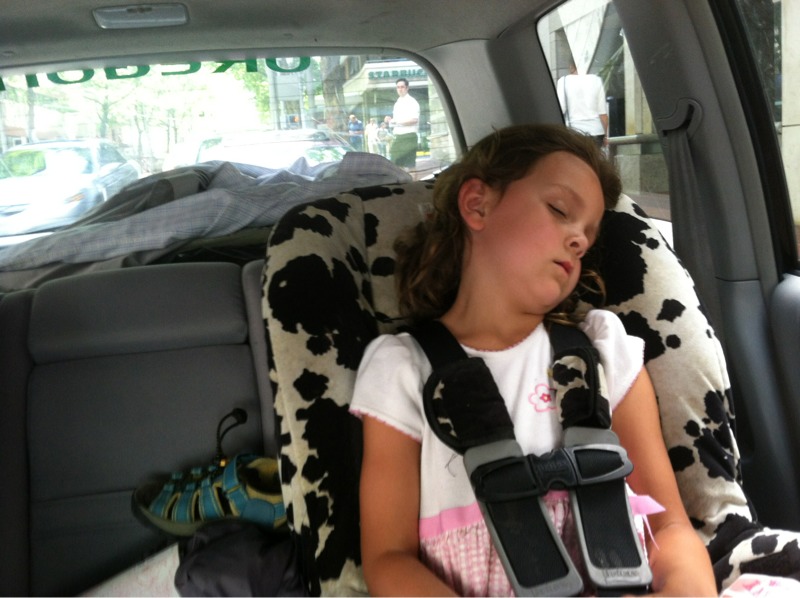 We are headed home for about 24 hours and then we go to Medford and Crater Lake! 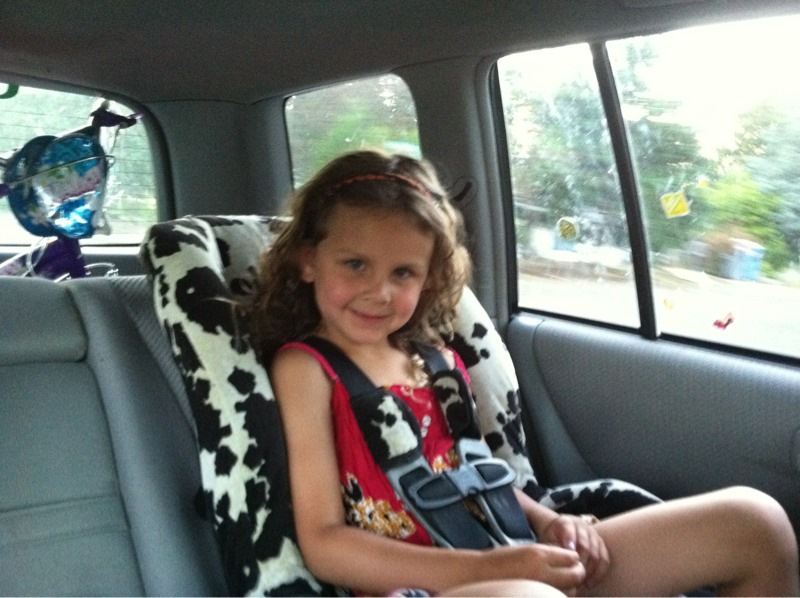 another marathon day! Preschool, picnic and playdate with friend at park, Abigail’s ballet conference, coffee with the kids’ babysitter. We told her goodbye:( she is graduating and moving. We will miss her. Then we headed home, the kids passed out at this point from utter exhaustion.
I cooked and did a mad cleaning spree during their one hour nap (the coffee helped!) then Kyle came home and Abby’s friend came over for a babysit swap playdate. The kids had a blast playing hide and seek and then had a bubble party outside listening to Beatles music! 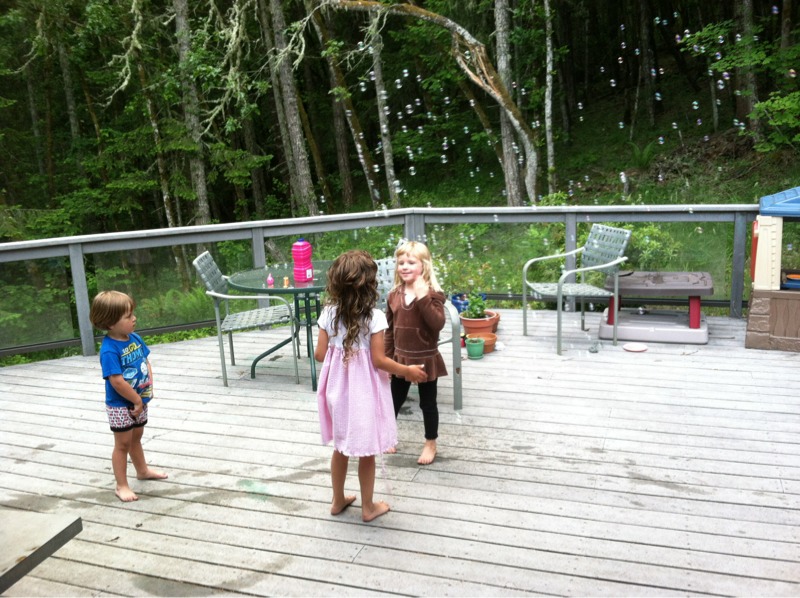 I love summer nights where we can be outside so much. They danced outside til about almost 9! We ended the party snuggling and reading books in the couch. Current favorites are Mimi, Pink Me Up, and Jump . They said goodbye to their friend, had a quick dance marathon with Daddy listening to Someone I used to Know and When I get older, the soccer song from world cup.

Before bed we read Doll People, a chapter book. They are so into it! If your child likes dolls and dollhouses, check it out!

Posted using BlogPress from my iPhone

Well today was another marathon day

Yesterday we went to storytime at library with friends, the park for a picnic with my dad, did a short bike ride due to two flat tires. Biking fail. Lesson learned- keep pump in car. Then we picnicked with Kyle, went home. Andrew passed out for two hours while Abby and I made birthday cards and some mom Abby time. I cooked a meal for a friend with a new baby, drove across town to deliver it while feeding my kids in car then we went to post office to deliver cards then we went to the French school to see some plays in French. The students did The Three Little Pigs and The Red Hen, some of Abby and Andrews favorites. Then they sang songs- Alouette and a Lion King song- both songs that Abby and Andrew know. They watched in amazement. Abby especially. She loves theater. She is constantly doing plays at home. She loves going to the theater. After the performance there was cake. They were in heaven! It is so powerful for the kids to see other kids speaking and performing in French. That is why I take them to these events despite it being a challenging time of day. Did we eat dinner in the car ? Did one kid throw a fit about having 2 pieces of cake instead of one? Sure. Was it worth it? Absolutely. Seeing the kids stare in amazement at these kids performing, seeing them smile during the Lion King song, watching Andrew crack up at the little first grade boy who jumped and fell off the stage ( this kid was way too excited about the performance. Don’t worry the boy didn’t cry. He kept jumping. Andrew was cracking up, I never heard him laugh so hard). Priceless! Making memories as they say!

Today- I taught all day, got the kids from my dad’s ,went to a swim playdate, caught up with friends, watched my girl swim, helped Andrew do torpedoes, got all changed, picnicked with pbj sandwiches in car, then went to Andrew’s first T ball class. Big night! Abby predicted he would cry and I insisted no but she was right. My kids always have trouble with new things. Abby cried shortly after entering the Hult for her first rehearsal Saturday and Andrew cried today. But I talked him through it, he was a little overwhelmed with all the new faces-three t ball coaches. He was so excited because they had the bases out and we we got to run them. He ended up having a blast and getting comfortable with the new teachers. I was so proud because at the end of class he was brave enough to go up to one of the coaches and ask when they would work on hitting with bats! This is something his sister has trouble doing- talking to new adults. I was so proud of him! Funny how kids are so different.

We ended the night with dinner at Ron’s where I entertained Kyle with my adventures in substituting stories- having to take 30 first graders on a hike without a map – my guides were 2 six year old boys who supposedly knew their way, then having the IA stop the hike and walk the kids back to the start because of her fear of poison oak. I then had to start again, I think I took them the wrong way but we accomplished the mission of releasing the classes’ tadpoles into a creek. I also arrived late to the school assembly and interrupted a school play and we entered through the front, not the back! Ah! I also had to get 30 kids to clean their desks at one time! Chaos!

To come down from such a busy day I went for along walk and run- (45 minutes mostly uphill) after reading and tucking in my sweeties. I always hope to come home to a silent house but no they were still awake and Andrew had red marks on his back from his loving sister. Apparently she attacked because he fed her baby dolls milk and she wanted to do it. God help me!

Another action packed fun day! Tomorrow I have nothing planned! Just to run 5 miles at some point in day… Hooray! 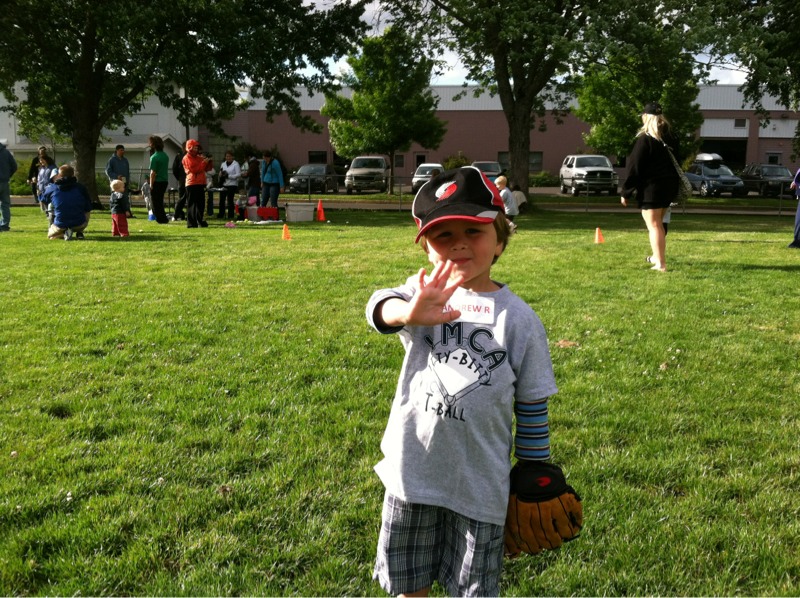 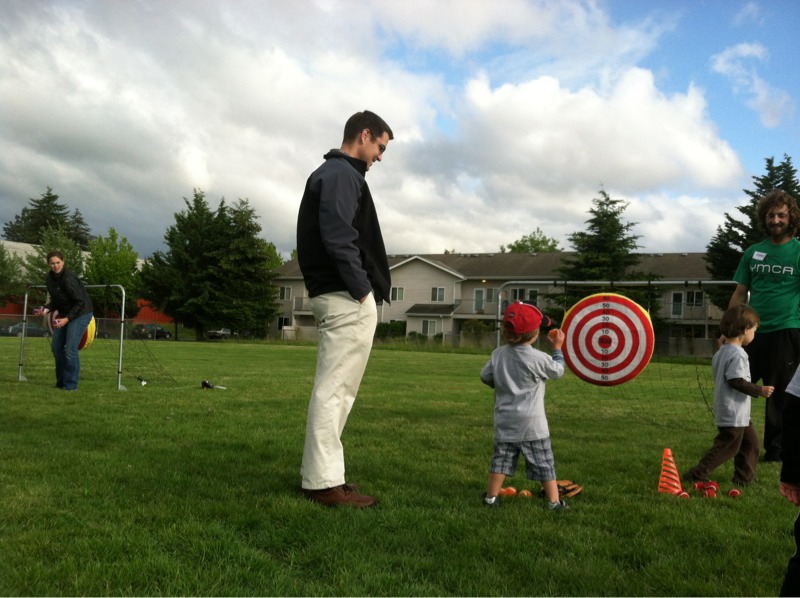 Life is pretty good- I went for a great run today that started dry, then it started pouring and it ended sunny! I have no problem running in pouring rain now! I didn’t even have my hat today! I think it helped I was running with a good friend and I have such a sweetie bear that puts up with his mom running in all weather. Once u took him on an incredible windy day and he didn’t complain a bit!

We have a lot of fun stuff coming up- trip to Portland, trip to Crater Lake, a Wiggles concert.

I realized today that the kids haven’t been sick for a long time! So nice!

We had a fun day today despite he crazy weather. Tomorrow is going to be sunny. I have kids that sleep til 8 am finally! Abby is reading. Andrew is starting baseball and soccer soon. Summer and good weather is bear. My birthday is soon. I am training for a half. So for all these Reasons I am in a good mood and living life.

Quote of the day- “what’s next?” Andrew always says this when we are leaving an activity ( playdate, preschool etc). it always cracks me up! He will says this likes he’s ready for more! I guess he loves having a hyper mom that is always packing his days full! Today he said this at 5 pm after preschool, a playdate, a run in rain, and a trip to our fave cafe! He is even more hyper than me and Abby I guess!

Well yesterday was a big day for Abby- her first dance performance on stage! She conquered stage fright, so proud if her! At the rehearsal she got nervous as soon as we entere the Hult. She wouldn’t go on stage for the rehearsal but tonight for the real thing she did it with a smile in her face! Her whole class did the dance so well! I am so proud of my big girl! As soon as she got into her dressing room before the show and saw all her friends the stage fright disappeared.

We were blessed to have all the grandparents come for the show. Andrew was a trooper sitting for the 2 hour show

I let Abby pick where to go for dinner after- she picked Fisherman’s Market. On the way there Abby asked Andrew what his favorite part of the show was , he said “when you turned into a butterfly.” Abby got a big smile on her face. What a sweet brother she has! ( she was a caterpillar)

When we walked into Fisherman’s Market, there was a big crowd waiting for her with flowers clapping. She was happy and a little overwhelmed by it. Then one of her ballet friends came to join us too. She was thrilled!

We ended the night at Sweet Life.

What a day! Perfect ending to perfect day!

Here she is eating her butterfly cookie at Sweet Life 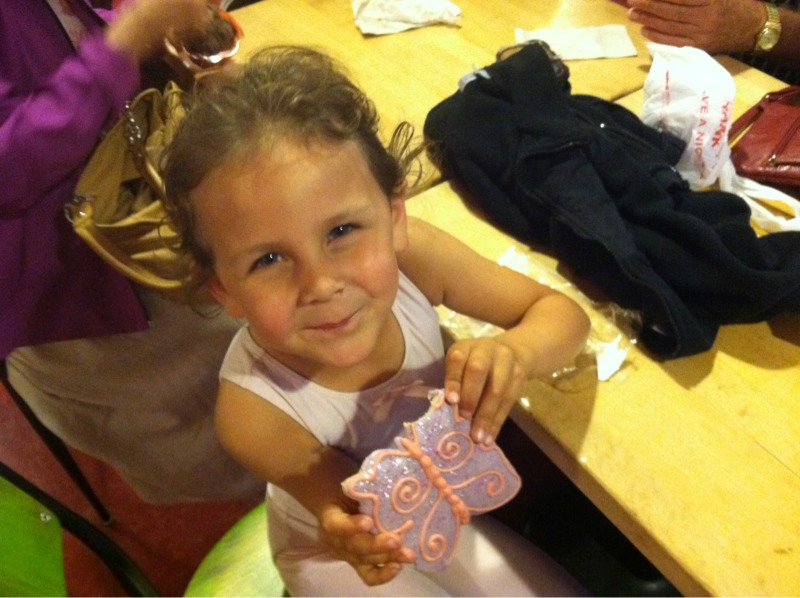