Well Kyle and I just got home from Portland. We spent our two year anniversary at the Kerry Rally:

You can see me!! – look in the back right. The rally was awesome- Kyle’s friend Jared hooked us up with the special blue tickets- which got us up in the front- not very front but very close. Thank you Jared- we owe you! Sean Astin opened up – the actor from Lord of the Rings (Frodo’s best friend) and Goonies (Betsey- I immediately thought of you when he brought that up! Goonies was filmed in Astoria, OR) Then the lead singer of Everclear played. He’s from Portland. Then Barbara Roberts, the former governor of OR, spoke along with several other speakers. Barbara gave an awesome speech. Kerry and Dean walked up and everyone went nuts. Dean and Jim Rassmann, the man Kerry saved in Vietnam and who is from Florence, OR, introduced Kerry. Kerry gave an awesome speech. He seems like such a nice, genuine man. It was really a thrill to be there today. He stayed after signing autographs and shaking hands for a long time. Thanks to Kyle we got his autograph! (Sophie was dying for his autograph so I couldn’t come home w/o it) Kyle and Jared got to shake his hand. We went to Red Robin to celebrate our anniversary. And Kyle really made my day because he got me DIDO CONCERT TICKETS FOR THURSDAY!!!!!!!!!!! I can’t wait, we’re going to see her Thursday night. I’ll be sure to take pictures. We unfortunately didn’t have the camera while at the rally today. More soon!!

Hi, we’ve spent the past few days in Medford visiting family and having a little time to relax. Yesterday we went to the Valley View Winery outside of Jacksonville– a really old and really beautiful place. We also went by the town of Buncom, Oregon. This place is a real life ghost town and was really cool to check out. We also went to The Rogue Creamery and picked up some world class blue cheese. Today we went to Emmigrant Lake in Ashland with my grandmother. The weather turned out great and we had a nice little picnic. We were also able to see my uncle on our way there, which was great. Tonight we picked up some French cheese to go along with the local stuff and made ourselves a nice little Fondue (our best imitation of what we had in France). I think it came out pretty darn well and left us all nice and full. Tomorrow we both head back to Eugene for more job interviews and work. We are so happy to be back in Oregon, it’s a dream come true. It’s been very busy, but it’s starting to feel like we are home again. Our next big project is getting our own place, and we are hoping this happens sooner than later. Monday is our two year Anniversary! For starters, we are going to meet with the next president of the United States, and from there, who knows…. Talk to everyone soon. We had a great time here in Medford.

We are both so so glad to be back home. It’s been rough getting over the jetlag this time around but the hours are starting to get a bit more normal each day. We”ve both been looking for work and an apartment, and we are hopeful something will turn up on both fronts before too long. We have been spending a lot of time with Sara’s family and this weekend may go to the coast to relax. We are also hoping to meet up with a couple of my old friends tonight. Here is one thing that never changed from the time we left in August: 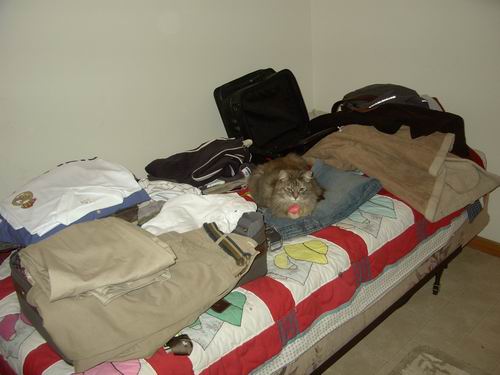 Pictures will be going up in the Photo Albums section over the next few weeks/months/years as we take stock of everything we did this past year. We truly have quite an amazing collection of pictures. Right now they are all sitting on our old laptop, so we need to get them on CD backup asap.

Hi, we made it back last night after a killer day of traveling. It feels great to be home but I know at least I am still out-of-it enough to not fully appreciate everything quite yet. Hopefully over the next few days it will all begin to be easier. It was great to see Sara’s family again and Lizzie was very happy to greet us when we walked in the door. We’ll be in Eugene through next week, and then in Medford for a week. Talk to everyone soon.